OHHA vowing to fight for its survival in Ontario

Home » OHHA vowing to fight for its survival in Ontario 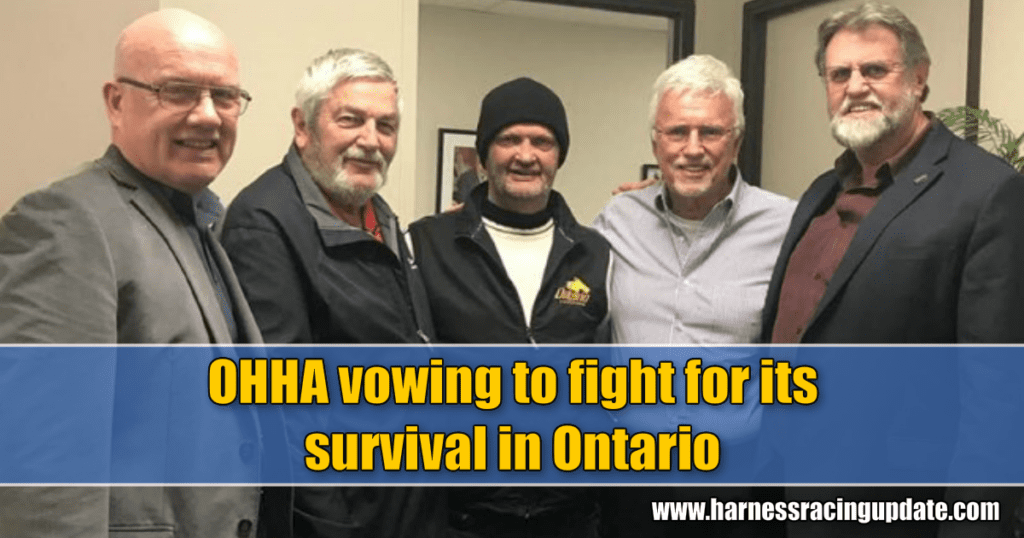 OHHA vowing to fight for its survival in Ontario

The existence of the Ontario Harness Horse Association is in jeopardy after a decision by Ontario Racing to transfer track revenue to rival Central Ontario Standardbred Association as of April 1.

The Ontario Harness Horse Association (OHHA) is vowing to fight a decision that it says, “if not reversed, will effectively end” the association by “withdrawing its funding” and allowing the Central Ontario Standardbred Association (COSA) to offer benefits coverage to all standardbred horsepeople in Ontario as of April 1.

The decision to allow COSA to offer benefits province-wide and to direct OHHA’s track revenue to COSA was made by Ontario Racing (OR), the umbrella group that manages horse racing in the province. COSA has a seat at the OR table, but OHHA does not.

OR chair John Hayes said, “COSA represents the Ontario horse owners, trainers, grooms on the Ontario Racing board. The redirection of funds… relates to purses paid and the deductions from those purses that are set aside for benefits at the Ontario racetrack members of the OR association.”

OHHA, formed in 1961, currently represents horsepeople at most of the province’s smaller tracks. Annual OHHA membership fees are $12.

COSA, formed in 2009 when OHHA failed to reach a contract with the Woodbine Entertainment Group (WEG), represents the horsepeople that race at Canada’s largest racetrack, Woodbine Mohawk Park. It is free to become a member of COSA.

Hayes said, as of April 1, that track revenue money would go to COSA to run the benefits program across Ontario.

“The OR board was of the opinion that those funds should be directed to COSA and the member racetracks of OR, rather than OHHA,” Hayes said. “COSA is the member on the board and we just wanted to be sure that those funds went to COSA to distribute to their members.

“COSA has opened up membership in their benefits to anyone in the province and I believe that all you need to join COSA is to show that you’ve got an AGCO license and that you are a member of Standardbred Canada (and you have an Ontario Health Insurance Plan (OHIP) card). So, there will be absolutely no horseperson in the province without benefits and we all know how crucial benefits are to individuals these days.”

COSA president Bill O’Donnell said, in addition to the track revenue, OHHA has been receiving some $25,000 per month — a total of $294,881 as reported by OHHA’s 2017 financial statement and listed under “provincial government contribution to member benefits.” O’Donnell said that money comes out of purses and that COSA will not need that money to manage the benefit program, leaving it in purses where it belongs.

“We were in a meeting one day and it said in the financials ‘$25,000 (per month) to OHHA.’ I said, ‘What is that?’ and they said they’ve been giving $25,000 a month out of the purse money, over and above the 1.5 per cent they get. They couldn’t operate without that,” O’Donnell said. “At that point, we could’ve taken it over and with our 1.5 and their 1.5 we could have supplied these benefits with no additional charge to the purse account whatsoever.”

O’Donnell said he was told by the Ontario Lottery and Gaming Commission (OLG) that the additional $25,000 per month was due to end sometime this year and that his biggest concern was that when that money stopped flowing, OHHA might not be able to continue to afford to offer horsepeople benefits.

“Do we want to see people without benefits? Absolutely not,” O’Donnell said.

Should the decision to transfer OHHA’s track revenue to COSA stand, using 2017 numbers as an example, the $386,731 OHHA received from track revenue would give COSA revenue of $987,797 to run the benefits program.

O’Donnell and Hayes were interviewed by phone for this story. OHHA president Jim Whelan was offered the same opportunity, but he declined a phone interview, saying he would only agree to an in-person interview, despite a looming deadline and some 100 miles between himself and this story’s reporter. HRU was not prepared to give him special treatment.

Whelan was quoted in an OHHA press release of Feb. 5 as follows, “If our members felt that they would be better represented by COSA, they certainly could have joined that association and sought to have it administer benefits, and insurance at their tracks… In 1962, OHHA was established by horsepeople out of necessity to fight for the interests of standardbred racing in Ontario, at all levels of government. We aren’t prepared to let Ontario Racing take that right away from us.”

In that same release, OHHA general manager Brian Tropea was quoted as saying, “OHHA represents the interests of standardbred horsepeople across Ontario and has a long history of successfully administering health and insurance benefits and a retirement savings program for horsepeople, without controversy or issue. Standardbred horsepeople will not take this lying down. Our members are ready to fight.”

OHHA has been lobbying politicians to help them fight the decision. On Thursday (Feb. 7), OHHA’s Whelan, Tropea, Tom Bain and Mark Williams met with Chatham-Kent-Leamington MPP Rick Nicholls. Tropea’s Facebook page said OHHA had a meeting at the Ministry of Finance on Friday.

Meanwhile, O’Donnell said COSA has changed its bylaws to be able to represent anybody in Ontario, not just those that race at Woodbine Mohawk Park.

“We’ll have representatives at each track, whether we do it election wise or we appoint people, I’m not really sure, but are we just going to leave them out in the cold? No, absolutely not.”

O’Donnell promised a seamless transition as of April 1 and the same membership benefits at COSA that people with OHHA now receive.

One difference between the two associations is the fact that at OHHA, every member is entitled to a vote. O’Donnell said COSA does not allow caretakers to vote.

“The only reason we don’t is because they are employees,” O’Donnell said, explaining that virtually no business allows its employees full voting rights to dictate how a business is run.

As for what happens on April 1, O’Donnell was clear.

“COSA is getting the 1.5 per cent from those other tracks and we’re opening up the benefits if people want to come over here,” he said. “If they want to stay with OHHA and OHHA wants to supply them benefits, so be it, but I don’t think they can.”

(a) I agree to abide by OHHA’s constitution and by-laws and appoint and grant OHHA the right to act as my sole and exclusive agent and representative for the purposes of negotiating and executing contracts with all racetracks in the Province of Ontario and executing agreements relating to racing with any other group, body or association and I assign and transfer to OHHA, during the time I am a member, all my intellectual property rights, throughout the world, including copyrights, personality rights, and any causes of action related thereto, that I may own, arising from or related to my racing activity.

(a) I agree to abide by OHHA's constitution and by-laws and appoint and grant OHHA the right to act as my sole and exclusive agent and representative for the purposes of negotiating and executing contracts with all racetracks in the Province of Ontario and executing agreements relating to racing with any other group, body or association and I assign and transfer to OHHA, during the time I am a member, all my intellectual property rights, throughout the world, including copyrights, personality rights, and any causes of action related thereto, that I may own, arising from or related to my racing activity.